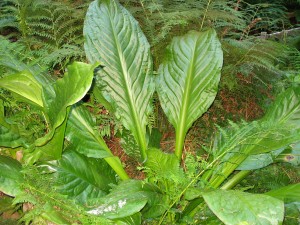 Western skunk cabbage (Lysichiton americanus) is a very weird, strangely beautiful plant. Of course, beauty is in the eye of the beholder and some people find skunk cabbage repellent. I think it is so bizarre, so unlike anything else that grows in western Oregon, that it has its own strange charm. Perhaps its most distinguishing characteristic is its smell – many people describe it as skunk-like, though I don’t think it is an apt comparison. Skunk musk is unpleasant; skunk cabbage is weird but not as strong or unpleasant as a skunk’s musk. I don’t know quite how to describe it, it’s just distinctive.   All I can say is, visit a swamp in spring time and experience it!

I’ve known the plant all of my life, and so perhaps I regard it as a bit of an old, if quirky, friend. I grew up on a hill above a swampy draw, just off of one of Coos Bay’s east side sloughs. As a child I wandered through it’s giant leaves to play in the stream, and walked to and from the school bus stop past marshes every springtime with singing tree frogs and bright yellow skunk cabbage blooms.

This plant’s botanical history is as interesting as its ethnobotanical history.  It is a member of the arum family, the Araceae.  A name not familiar to most northwesterners, because there are very few arums native to this region – only skunk cabbage and a handful of species of duckweeds.  (The duckweeds are also wonderful oddities – in the 19th century they were classified as arums, then moved to their own family, the Lemnaceae, and in recent years botanists of folded them back in to the Araceae).  The arum family has over 3000 species  in it – most of them in the tropics and subtropics, but span the globe.  They also tend to favor the water or marshy habitats and forest understories, although there are species that live in deserts and boreal climates.  And they tend to have very odd flowers.  Skunk cabbage is quite typical in this respect.  The flowers are actually on the spadix (the thing in a skunk cabbage bloom that looks like a yellow-green club) surrounded by a spathe, which is derived from a leaf and in our skunk cabbage is bright yellow.  Its odd smell attracts its pollinators – flies and beetles.  Many arums use flies or beetles for pollinators.  Some arums are famous for the horrific aromas, such as the corpse flower of Sumatra.

Native American people were quite familiar with skunk cabbage.  To the Tillamook it was called q’ilt, the Alsea called it q’ayu’l, to the Siuslaw and Lower Umpqua it was known as ts’yanx, in Hanis Coos has yayax, Milluk Coos and Lower Coquille as kimætl, and in Upper Coquille as kammæɫ.  The plant has waxy leaves that can grow to be a meter (3 feet) long.  Some tribes used the leaves to wrap bundles of food in, or put them as a layer in earth ovens to cover the food.

The rhizomes were useful as food and medicine.  On the lower Columbia river, the Kathlamet and Clackamas peoples had stories that told that skunk cabbage was an important food and kept people alive before the salmon first came to the rivers.  In our Coosan trickster cycle stories, the first trickster learned how to cook skunk cabbage.  He tried to eat it raw, but spit it out.  Then he put the root in hot ashes to cook.  When it smelled sweet, he took it out.  It tasted fine now, and so he said that is how human beings will cook it when they come into the world.  Then he cut up the root into many pieces and one at a time, picked up a piece and put it down, each time saying “Give this to your…” and naming a different kin name (Mother, father, grandfather, and so on).  In that way, he named how families would be.

Many northwestern tribes ate the cooked rhizomes of this plant, but some sources state it was not a food that was particularly enjoyed – it was a starvation food.  But some people liked it.  Lottie Evanoff, a Coos woman born about 1870, said she liked skunk cabbage.  She noted that bears liked it too, and ‘whatever bear likes is good eating’.  She thought it odd that white people did not eat it.

Keep in mind, skunk cabbage roots have to be thoroughly cooked to be safe to eat.  They contain calcium oxalate, which causes a burning sensation in the mouth and can be poisonous.  Cooking breaks this compound down.  Calcium oxalate is a common in many arums.  Taro, a cultivated root food found grown in many parts of Asia and Polynesia, is an arum with these same crystals and so are thoroughtly cooked, just as with skunk cabbage.

My Milluk great grandmother used to grind up with roots and mix them with honey.  She would give a spoonful of this medicine to kids when they had a cold.  My older cousins have told me about this medicine – they said it was quite peppery!  I am sure it was.  Beverly Ward wrote about her husband’s Lower Coquille grandmother Susan Ned.  One of her medicines involved skunk cabbage.  “She kept a bunch of skunk cabbage and licorice [fern] roots on the wall in the kitchen. She put a big kettle of water on the stove and boiled the roots until the water boiled down, then she used the juice for colds and coughs.”

Contemporary herbalist Michael Moore has also written that medicine derived from skunk cabbage rhizomes can be used to treat minor respiratory troubles.  Since I’ve had a bout of bronchitis lately, I’ve almost been tempted to dig up some skunk cabbage and make some medicine and brave its pepperiness.  Almost.

Gunther, Erna. 1945. Ethnobotany of Western Washington: The Knowledge and Use of Indigenous Plants by Native Americans. University of Washington Press, Seattle.

Haskin, Leslie. 1934. Wild Flowers of the Pacific Coast. Binfords, and Mort, Portland, OR.